MCC EuroChem, one of Russia’s largest and fastest growing fertilizer producers, has signed a contract with Research and production corporation “United Wagon Company” (UWC or the Holding) (MOEX: UWGN) for purchase of 700 new generation hopper cars. The rolling stock will be used to transport mineral fertilizers produced at EuroChem enterprises, including Usolskiy Potash (part of MCC EuroChem), which explores the Verkhnekamskoye deposit with potash ore reserves of 2.3 billion tonnes.

Under the contract, the whole batch of model 19-9835-01 hopper cars will be delivered to EuroChem by the end of the first half of 2019.

The new generation hopper cars for transportation of mineral fertilizers are equipped with bogies with the axle load of 25 tf and a body with the volume of 101 m3. The car specifications make it possible to carry extreme loads of up to 76.7 tonnes, which is 6 tonnes more than can be carried by hopper cars with standard bogies widely used in the fertilizer industry at present. The schematic construction of the new car reduces its weight while increasing strength and durability.

A special two-component internal coating of the body based on a vinyl copolymer provides excellent protection against aggressive cargo explosion. Increased volume of bins lowers the center of gravity of the car, making it harder to overturn. Stamp-welded hatches offer improved rigidity and durability, preventing corners of the cover from being pressed out from collars. A molded rubber strip, being used as a sealing, has a continuous section, and that property significantly increases the sealing's wear resistance; moreover, this sealing contributes to increased tightness of interfacing between the unloading cover and the collar.. Each hatch has only two locking and sealing devices, compared with eight on other hopper cars, offering significant cost and time savings. 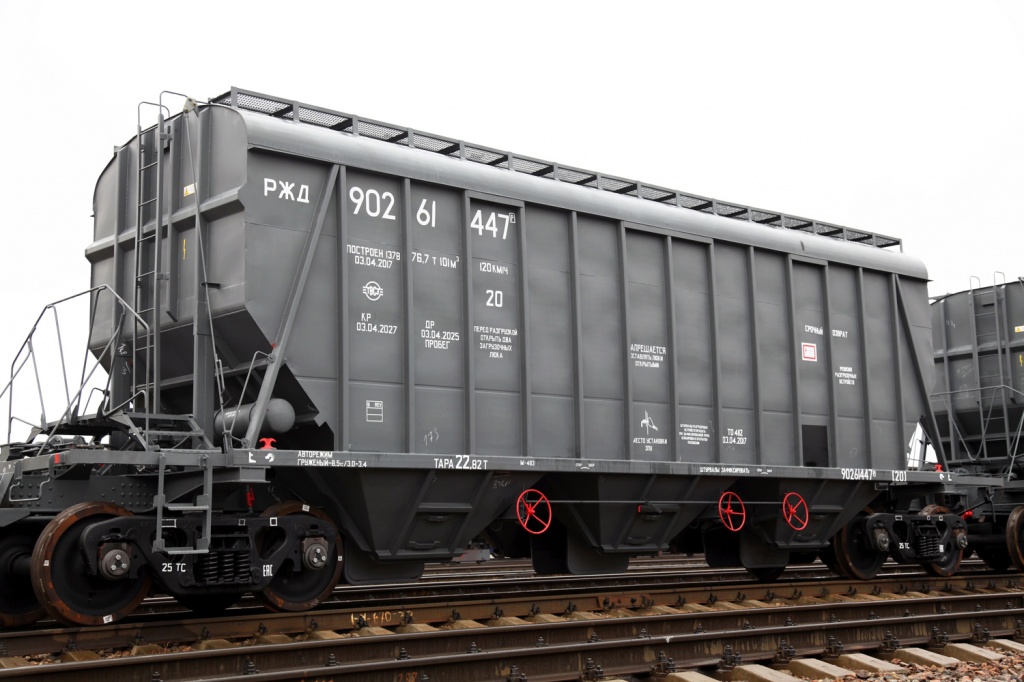 Another key advantage of the model 19-9835-01 car is its increased terms of between-repairs run: the new car can be used for 8 years (or up to 1 million km) between overhauls, compared with 2 years (or 110,000 km) for standard analogues.

Kirill Kholostov, Deputy Head of the Logistics Division at EuroChem, said: “Increasing potash production and sales capacity is a priority for our company. EuroChem’s competitiveness on domestic and foreign markets depends on end-to-end control of the supply chain, thanks to our own logistics infrastructure (railway facilities at enterprises, rolling stock, terminals at Russian ports) and use of the latest technologies, including transportation technologies. Acquisition of cars from UWC is a logical step towards implementation of our plans.”