The model 19-6978 and 19-6978-01 six-axle hopper cars are designed for the transportation of grain freight and mineral fertilizers, respectively. According to UWC’s calculations, the use of these cars makes it possible to increase carrying capacity on the network by 22% and reduce the required fleet size by 38%, as well as to lower the cost of transporting freight thanks to savings made on freight charges for cars.

The body volume of both models of hopper car measures 160 m3, allowing a wide range of bulk freight to be transported efficiently, making use of almost the entire 113.5 t load capacity. It has been possible to achieve these results thanks to the car’s articulated design: two of its sections are joined together with an articulated device that ensures unhindered passage through curved sections of track, including curves with small radii, as well as the inclines of hump yards. The cars have an independent bogie-by-bogie brake system, installed on three model 18-9855 bogies with an increased 25 t axle load and an integrated brake operating mechanism. This improves the reliability and efficiency of operating the cars compared with traditional solutions. UWC maintains a well-developed network of service centres for servicing and repairs of bogies for articulated cars in the 1,520-mm track gauge space. 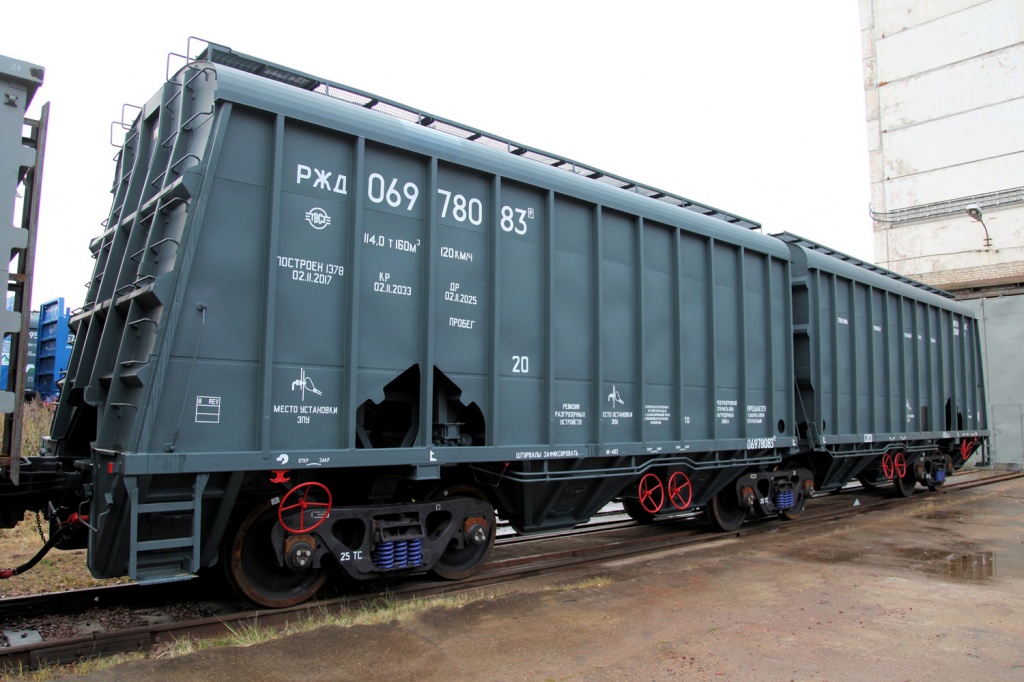 Both models of hopper car are compatible with standard loading and unloading infrastructure and can be operated at all existing terminals. Eight loading hatches, located as close as possible to each other, ensure that the entire body volume can be filled uniformly. The locking and sealing device mechanism speeds up the car’s processing time. The angles of inclination of the end walls and bin walls have been designed in such a way as to ensure that the product is fully unloaded (the bins in the cantilevered parts of the body eliminate ‘dead zones’), as well as making unloading operations more convenient and faster.

Boris Myagkov, Deputy CEO for Commerce and Marketing at United Wagon Company: “We are currently seeing high levels of competition on the grain market among exporting nations, production volumes of mineral fertilizers are increasing, and the demand for these products is growing domestically. UWC is therefore giving its partners the chance to make use not only of new generation cars on 25 t axle load bogies, but also articulated cars, which provide additional cost effectiveness in transportation. The UWC-produced articulated hopper cars and gondola cars are now ready to be rolled out onto the network, and the tank cars are already showing great operational results. In the near future, the Company plans to certify its articulated flat cars, which are equipped to transport freight in interchangeable bodies, including hopper bodies. We believe that the growth in freight productivity is down to the articulated rolling stock.”