Research and production corporation “United Wagon Company” (UWC or the Holding) (MOEX: UWGN) has completed a contract for the delivery of 60 flat cars on bogies with enhanced axle load to Russia’s largest intermodal container operator, TransContainer, following the results of an open tender. The cars are intended to carry heavyweight containers. The entire batch was shipped to the customer in December 2018.

TransContainer received 30 model 13-6851-05 flatcars (40 feet) and 30 model 13-6903 flatcars (80 feet) under the contract. Both models have innovative bogies with an axle load of 25 tf and offer load capacity gains, catering for freight containers and tank containers of a gross weight of up to 36 tons. Key features of the freight cars include enhanced reliability and safety during cargo transportation thanks to design specifics of the bogies and the center sill. The quantity and placement of twist locks enables containers to be placed on the cars in various combinations.

TransContainer is the largest owner of specialized rolling stock in Russia, the CIS and Baltic countries with almost 26,000 flat cars for containers and over 67,500 heavyweight containers. Andrei Banshchikov, Director for Equipment Operation at TransContainer, said, “Our company decided to make new purchases of freight cars on 25 tf bogies in order to meet the increasing demand for our services. We are also committed to the steady improvement of our rolling stock’s operating efficiency , so we were attracted not just by the higher payload, but also by a longer mileage between maintenance activities increased to 1 million km, which will speed up our international transit throughput.”

The 13-6851-05 model flat car has a load capacity of 80 tons and a loading length of 40 feet. An energy-intensive draft gear enables the transport of containers with hazardous goods. The service life of the car is 40 years. 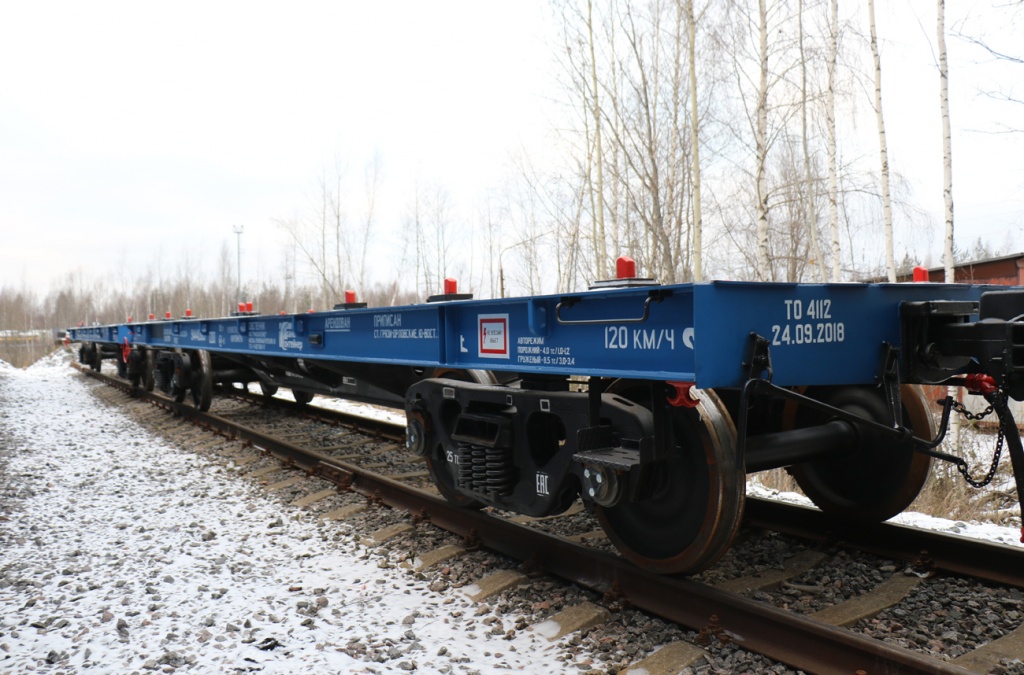 The 13-6903 flat car has a load capacity of 74.5 tons and a loading length of 80 feet, enabling carriage of up to 11 tons more cargo in comparison with most common models presently used on the market. The ability to transport containers, including refrigerated containers, with a gross weight of up to 36 tons renders the 13-6903 unique among long-wheelbase railcars. Local technical guidelines for placement and securing of heavyweight containers on the 13-6903 model have been officially approved. Its service life is 32 years.

An extended interval between scheduled maintenance (up to 1 million km or 8 years) is a significant competitive advantage of both models which slashes the life-cycle cost of the cars by almost three times compared to that of their previous-generation analogues. Maintenance facilities for the flat cars, as for all rolling stock manufactured by UWC, are in place throughout the whole 1,520-mm gauge area, where the Holding’s freight cars are operated.

The container flat cars were designed by the All-Union Research and Development Centre for Transportation Technology and manufactured at UWC’s railcar construction facilities in the town of Tikhvin (Leningrad Region).

The demand for container flat cars in Russia is growing in line with the global trend towards containerization in the transport industry. A total of 4.5 million TEUs were transported via the RZD (Russian Railways) network over 12 months of 2018, 14.0% more than a year earlier. All transport routes saw growth: about 1.9 million TEUs (+5.7%) were carried inside Russia, 557.2 thousand TEUs in transit (+33.5%), over 1.1 million TEUs to export (+16.9%), and 859.8 thousand TEUs on import routes (+21.5%). Shipments of loaded containers by all transport means increased by 13.8% in 2018 compared with 2017 to reach some 3 million TEUs.